The beamline consists of three branch lines, each one equipped with a specific purpose end-station. The installation of temporary user experimental chambers is available.
(for more details see https://www.elettra.eu/elettra-beamlines/bach.html)

The spectroscopic methods available at the BACH beamline have been applied in several fields of modern condensed matter physics, for example on thin molecular and self-assembled overlayers on metal and thin oxide surfaces, single-layer, layered materials and 2D heterostructures, oxide thin films and interfaces, electron correlated materials, superconductors, and novel magnetic materials. The investigations are mostly focused on understanding the interplay between electronic, structural, magnetic, and functional properties and the mechanisms of interaction among different degrees of freedom in these systems. Chemical reactions at surface, such as heterogeneous catalysis, on-surface polymerization, surface and subsurface alloying as well as the stability of low-dimensional and layered materials in humid, oxidative, hydrogen or ambient environments can be also tackled thanks to the surface and chemical sensitivity of the available spectroscopic methods. More recently the X-ray- based spectroscopic techniques have been integrated on BACH beamline for the study of liquid and on the liquid/solid interfaces to enable the comprehensive understanding of the electron transfer processes during chemical reactions. This goal has been pursued by the encapsulation of fluids between a thin membrane and a solid substrate. 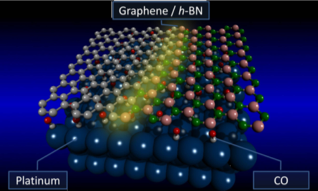 Our activities in the field of 2D materials are focused on surface-assisted synthesis of doped graphene and 2D in-plane hexagonal boron nitride – graphene heterostructures. It has been only recently recognized thatheterogeneous catalysis can take place in the confined space between a solid catalyst and a weakly interacting two-dimensional (2D) overlayer. This peculiar space can be regarded as a nanoreactor, where confined molecule adsorption and surface reactions may occur. Even more enhanced catalytic performance could be exhibited by hybrid layers in which two or more materials are combined. We are examining the confinement effects and the reactions in the nanospace between an in-plane heterostructure of graphene and hexagonal boron nitride and platinum substrate. Furthermore, we have succeeded to fabricate sealed graphene nanobubbles filled with aqueous solutions between a graphene layer and a TiO2 crystal which allows us to study thermo- and photo-induced reactions. 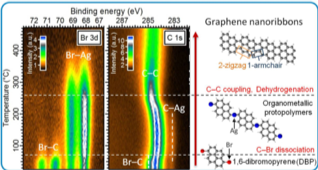 Tunable source of excitation energy, high-resolution XPS and soft x-ray XAS permit us to significantly enhance surface sensitivity as well as sensitivity to certain elements (e.g., nitrogen, sulfur, lithium, carbon, oxygen, chalcogens, top-most atoms). The high sensitivity to their chemical states is being exploited in the study of chemical reactions at surfaces, such as heterogeneous catalysis, on-surface polymerization, surface and subsurface alloying. We are studying growth, intercalation, and chemical reactivity of 2D materials; growth of graphene nanoribbons from halogenated molecular precursors by surface-assisted catalysis; photocatalytic reactions in nanobubbles trapped under graphene. 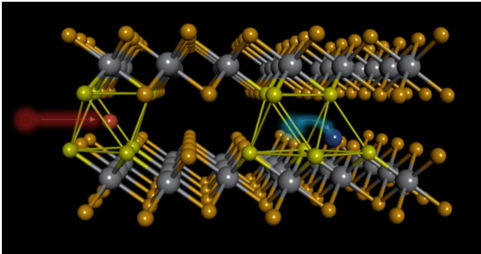 Transition metal dichalcogenides (TMDC) represent a family of materials typically in the form of MX2 where M is the transition metal and X is the chalcogen (S, Se, Te). Most TMDC bulk crystals are layered solids with strong bonding within the plane but weak interlayer bonding. Dopant atoms may intercalate between layers and appropriate dopant selection and concentration can improve the performance of TMDCs. On the other hand, improper doping might have unwanted effects. Understanding the principles and mechanisms yielding the phases with desired or undesired properties is an important prerequisite to engineer materials with tailored functionalities. In collaboration with several external research groups, we study the composition and electronic structure of new TMDC materials or TMDC synthesized by novel methods. 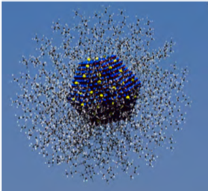 The wide photon energy range and high-resolution XPS are very suitable for the non-destructive chemical composition depth profiling of nanostructures, such as nanoparticles and nanotubes. XPS depth profiling of such non-planar objects is not available in standard laboratory conditions, because it requires a tunable photon source. This technique has been used at BACH beamline for the chemical composition analysis of quantum dots (QD) solar cells, nanocrystals of semiconducting material which offer great potential as the light-harvesting elements in next-generation solar cells.

Spectroscopy in liquids and at liquid/solid interfaces 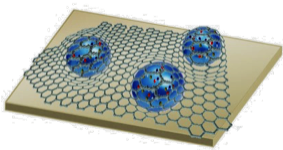 XPS and XAS techniques have been successfully used at BACH beamline to follow thermo- and photo-induced reactions in liquid phase. This goal has been pursued by the encapsulation of fluids between a thin membrane and a solid substrate. This research line is developing on BACH beamline following new strategies, as the use of micro electrochemical cells suitable for photocatalytic or electrochemical reactions, such as CO2RR, ORR, OER and water splitting.

Assessing the stability of Cd<inf>3</inf>As<inf>2</inf>Dirac semimetal in humid environments: The influence of defects steps and surface oxidation

Surface-Confined Polymerization of Halogenated Polyacenes: The Case of Dibromotetracene on Ag(110)